This may be a little too cynical for many teachers’ tastes, but we couldn’t help seeing some potential fun in the Chris Christie Bridgegate scandal.

It can be illuminating to try and write in someone else’s voice, or with a structure that is ridiculous but that gamifies writing (like writing a short story with 26 sentences, each starting with a letter of the alphabet – in order). So parodying a politician trying to get out of denying something, without confirming that the thing actually is true, could be a fun in-class writing assignment. 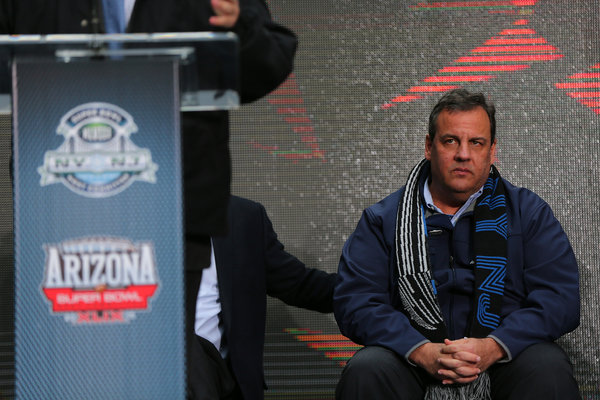 Chris Christie at a SuperBowl rally in New York City on Saturday February 1.

You could ask your students to write, in the most passive and incoherent but grammatically correct way, a denial of involvement in a political scandal without actually denying their involvement. Sort of like when we’re busted as children for breaking the cookie jar and find a way to blame it on some other power even though we’ve got cookie crumbs on our shirt.

Little background for those not obsessing over the Gov of NJ:

Christie has gone on record saying he only knew of the bridge closings after they happened. From The New York Times:

I had no knowledge of this — of the planning, the execution or anything about it — and that I first found out about it after it was over,” he said. “And even then, what I was told was that it was a traffic study.

But as the evidence has mounted, Christie is walking back this denial. From NBC News:

In a statement Friday afternoon, Christie’s office said that rather than call Christie’s behavior into question, the letter “confirms what the Governor has said all along — he had absolutely no prior knowledge of the lane closures before they happened and whatever Mr. Wildstein’s motivations were for closing them to begin with.”

Have fun. We’d love to see the best examples posted to this page!